It all started with a pit...

Back on July 21st, 2012 we somehow adopted an American Pitbull Terrior from a local shelter.  When I say somehow, I mean that I didn't expect to walk into a shelter (my first time ever at a shelter) and fall in love with a little lady who we now call Athena.  She's a one year old blue brindle pitbull with quite the personality! 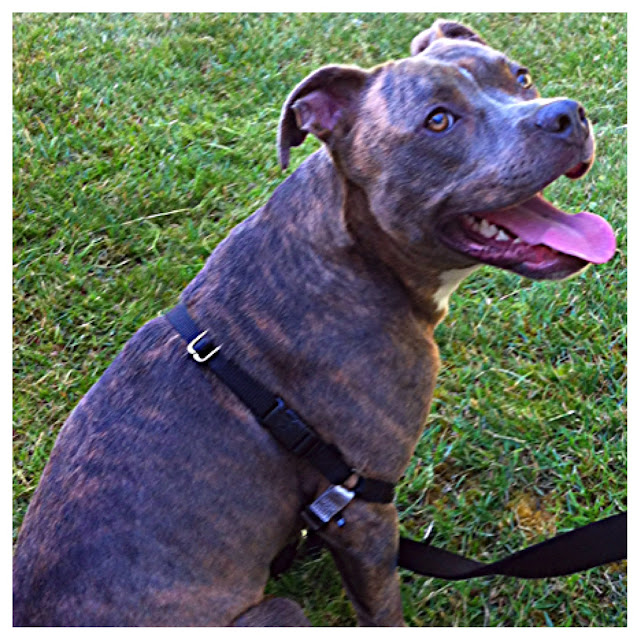 Backkkk up before that day at the shelter.  B has been wanting a dog for a while, and I have always wanted a dog.  We talked about SOMEDAY getting a dog...not now.  Well, B suggested that we stop into a shelter so that I could interact with a pitbull, seeing as this was the breed that we knew we wanted to adopt (we had done LOTS of research online about pitbulls prior to entering the shelter).

As we walked up and down the kennels, I was overwhelmed with the barking and jumping dogs and thought to myself that I never wanted to go back to this place again.  With all the noise and chaos I had gotten ahead of B as I quickly tried to examine each dog in its kennel.  I turned around to see him knealing next to a kennel with one of the only dogs in the shelter who was not barking or jumping.  We asked the attendant if we could take this one outside to see how she would interact with us.

We spent about 45 minutes outside with the dog and the attendant.  Apparently this dog had been recently returned to the shelter.  After three weeks, the previous adopter had returned her for being "dog aggressive."  We asked more questions about the situation that this dog had been in during her short adoption period.  The attendant told us that the family who had adopted her had a dog, a cat, and children at home.  They were looking for a new companion for their family dog.  Well, it turns out that the family had attempted to bring in a new dog to their family TWICE already and decided that each dog was "dog aggressive" towards their family dog.

Athena's story before this short adoption period is unknown.  The shelter said that she originally came to the shelter in June as a stray.  So, we are left wondering about this one year old dog's past.  Did she come from a loving family and simply escaped from the yard?  Was she ever abused or neglected?  We will never know.

But, back to the story about that day at the shelter....After playing with the dog we walked back into the  shelter and the attendant put her back in her kennel.  My heart broke as I thought about how this sweet dog had to spend more time in that noisy place all alone.

B and I decided to fill out an application and place a hold on the dog.  The next day we got a call that we got the dog =)  We drove back to the shelter (first we stopped into a pet store to get all of the essentials!) and picked up our new dog which we named Athena.

I was once again overwhelmed while at the shelter.  This time it wasn't the noise that overwhelmed me, but all of the information that was being thrown at us by the resident vet prior to the adoption.  All of a sudden we were being given instructions on how to give Athena different medications (one for her ears and one for her skin) and being told about all of the treatments she had while at the shelter.  No one had mentioned to us that we were getting a sick dog...

We listened carefully and followed all of the medical instructions while back at home.  In the next couple of days we took Athena to a local vet for our free first examination and she was found to be a healthy 45lb pitbull.

As of now, she's been with us for a little over three weeks.  There have been great moments and there have been challenging moments.  But, all in all, we love our new pooch!

Posted by Pitlandia Pooch at 2:38 PM