We love the Kong just as much as every other dog owner out there, but it wasn't until recently that we began to use them to their full potential.  Now that Athena is a food dispensin' kind of gal, she no longer eats from her food bowl, instead she receives her meals throughout the day in food dispensing toys and during training exercises. 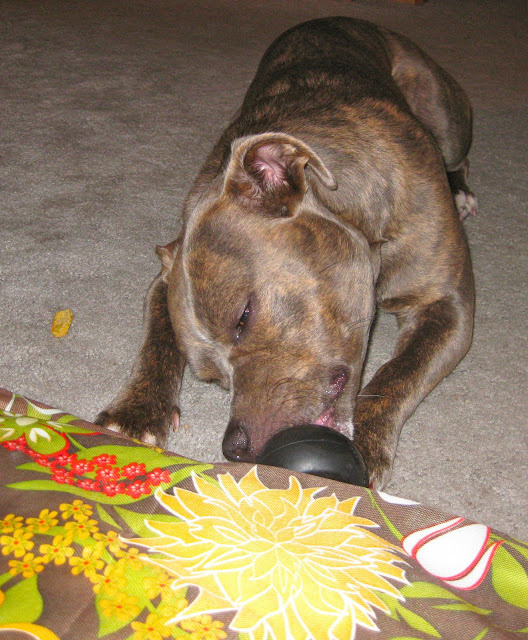 The Kong has helped to provide Athena with some much needed mental stimulation on a daily basis and has also helped to cure Athena of her "crate anxieties."  It takes Athena a good 2-3 hours to lick out an entire Kong (she rarely chews on them).  She knows that her crate is the only place where she will get this delicious treat and we make sure to cover her crate bed with a towel because frozen Kongs can be a mess!

Although many people have posted about how to stuff a Kong, we didn't want to be left out of the fun, so we decided to provide you with our own explanation of how to make what we call a Kong Supreme: 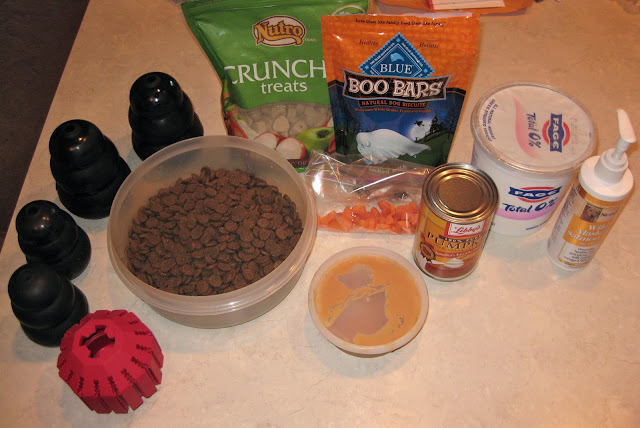 I like to make Kong Supreme's in weekly batches so that I only have to go through the messy process once a week.  Here are the supplies that are shown above: 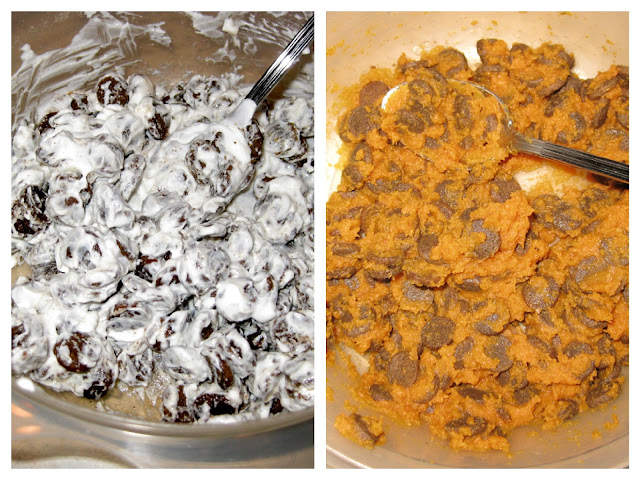 I start by mixing Athena's kibble with canned pumpkin or plain greek yogurt and salmon oil.  First I measure out the amount of kibble that I want to stuff in the Kong (the XL Kong usually holds about 1/2 cup, the L Kong holds less).  Next I mix in a couple of spoonfuls of pumpkin or yogurt along with two pumps of salmon oil. 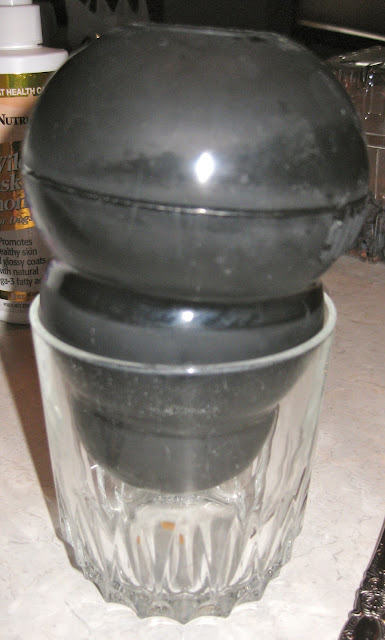 To make the stuffing process a bit easier and a little less messy, I place the Kong inside of a glass.  Then I begin assembling the layers inside of the Kong starting with the peanut butter.

Layer 1- Peanut Butter: I put about a 1/2 tablespoon of peanut butter inside of the Kong to help keep the pumpkin or yogurt from leaking out.  I then squish a couple of yummy dessert treats into the peanut butter (either Nutro Crunchy Treats or a Boo Bar) 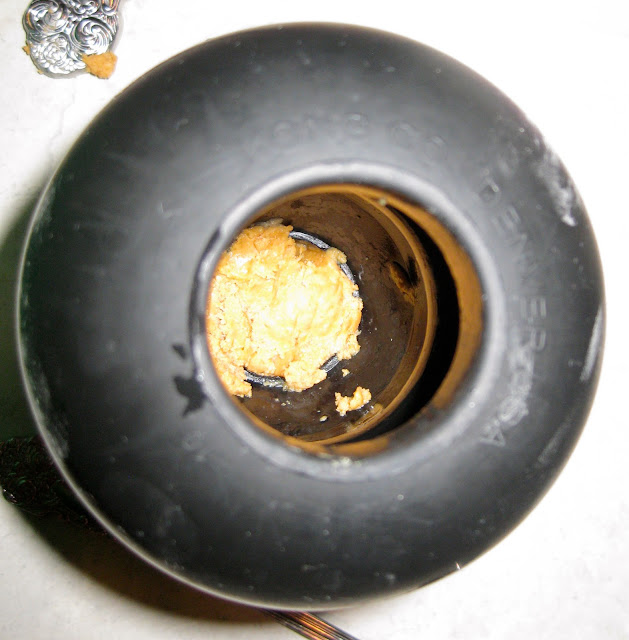 Layer 2- Kibble Mixture: I spoon in my kibble mixture from step #2 and use my fingers to compact it. 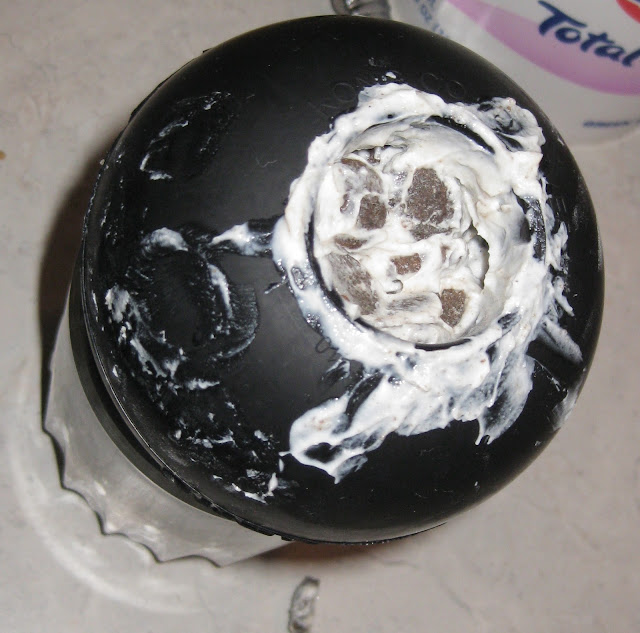 Layer 3- Peanut Butter:  I then finish off the Kong with another 1/2 tablespoon of peanut butter to close off the opening followed by a special treat that sticks out of the peanut butter for instant satisfaction!

Freezing the Kong is the secret to making this treat dispensing toy last for longer than 10 minutes.  Like I said before, Athena can spend up to 3 hours licking out the contents of a frozen Kong.  I like to place the Kongs in freezer bags to keep them from leaking during freezing.  I let the Kongs freeze at least over night, but the longer they are in the freezer, the longer it takes for Athena to get all of the yumminess out! 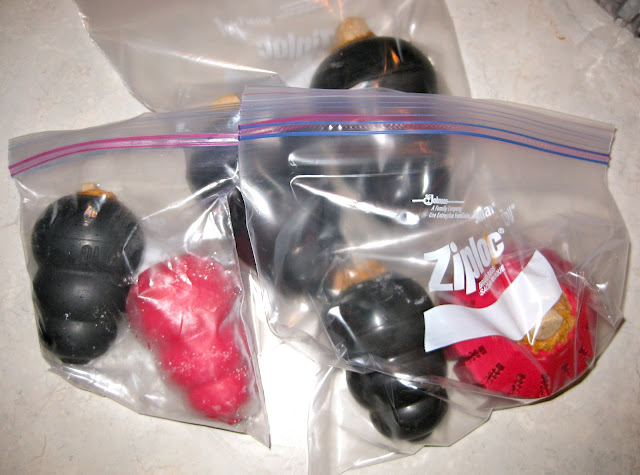 There are many different ways to stuff a Kong and I look forward to testing more recipes in the future.  As always, I often google "Kong recipes" and "how to stuff a Kong" to find out how other dog owners stuff their Kongs.  Here is a list that I have compiled of some excellent recipes and Kong stuffing directions for keeping your dog busy and interested in their Kong:


What's your favorite way to stuff a Kong?  What ingredients do you put inside of your dog's Kong?
Posted by Pitlandia Pooch at 6:00 AM