Athena and the Big, Bad, Fireworks

Well, last night we experienced the big booms and bangs of fireworks with Athena during her first 4th of July spent with us.  In the first few months of having Athena, I was sure that we would never be able to enjoy the 4th of July again.  With her fear of pretty much everything, I figured we'd have to drug her and keep her locked up while we watched fireworks on TV.  However, more recently Athena has put on her big girl panties and has really shown us that she's not afraid of EVERYTHING, just a few things (like skateboards...and certain people...and rolled up rugs...). 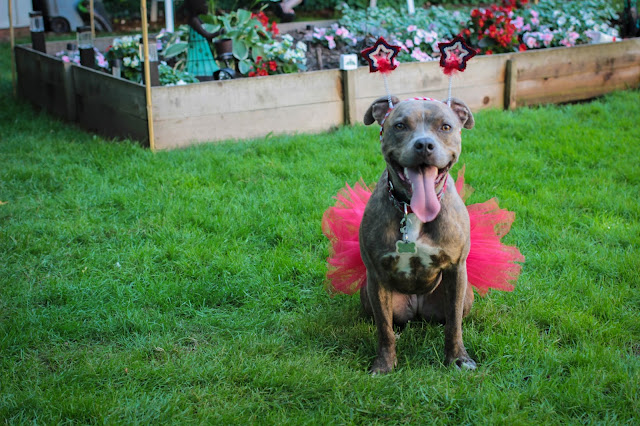 Our first indicator of how Athena would react to fireworks came on New Year's Eve when a few people in our neighborhood lit some off.  Surprisingly, Athena showed no reaction to the loud noises.  As the 4th of July approached, part of me thought that Athena might not be bothered by the fireworks, but another part of me knew that with the 4th of July comes many more fireworks that are much louder than they usually are on New Year's Eve. 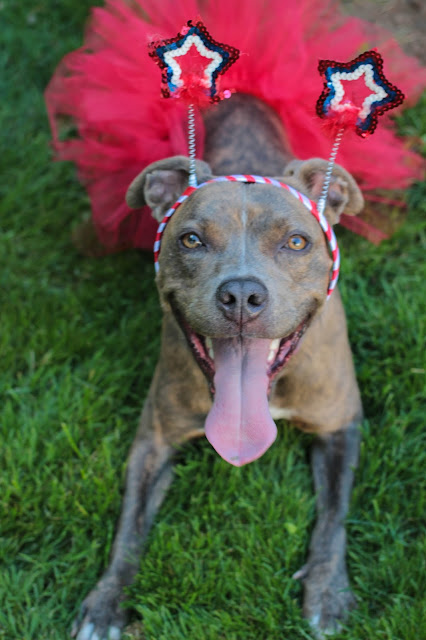 Fireworks went on sale here in Portland a little over a week ago, so many people have been lighting off their loot in the days leading up the the 4th.  Athena showed no reaction to any of these pre-4th festivities giving us hope that she'd be calm on the actual day.  The thing about fireworks here in Oregon is that we can't light off any of the big cool ones that shoot in the air.  That means that all of the fireworks that are actually legal here are pretty quiet and can't go more than a foot in the air, or six feet horizontally.  The catch is, we are a ten minute drive to Washington where the big loud fireworks are legal.  MANY Portlanders buy their fireworks in Vancouver and then light off the illegal fireworks on the 4th and risk getting the $750 citation. 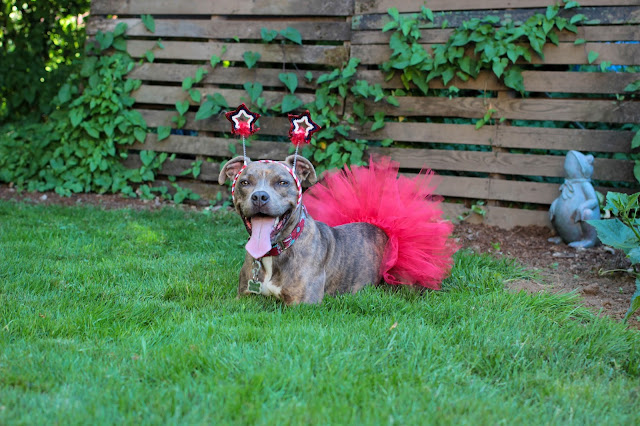 Even knowing that many of the fireworks in my grandma's neighborhood would be loud and illegal, I brought Athena to my usual family get together last night.  Being the helicopter dog mom that I am, I packed a bag full of goodies including a deluxe frozen Kong, frozen beef marrow bone, jumbo bully stick, multiple Nylabones, bull horn, toys, balls, and lots of treats to prepare myself just in case Athena had a meltdown.  While my family barbecued and played badminton, Athena played ball and dressed up for the occasion.


Once it got dark, the fireworks really started booming all around us.  Athena spent some time in her crate with a tasty treat while the TV and radio blocked out the noise.  My family and I lit off our own fireworks outside (I promise they were wimpy and legal) and Athena stayed completely quite and content in her crate (at a place where she's never been crated before!).


I can't believe that Athena really had zero reaction to the fireworks.  I know that so many people struggle to keep their dogs calm and free of anxiety on the 4th and I thought for sure that Athena would be one of those dogs.  But, as usual, Athena showed me that I don't have to be such a worry wart all of the time!


How did you spend your 4th of July and what do you do to keep your dog calm while the fireworks are booming?
Posted by Pitlandia Pooch at 6:00 AM

Email ThisBlogThis!Share to TwitterShare to FacebookShare to Pinterest
Labels: 4th of July, Fireworks, Life with Athena