Last week we took a little beach vacation to Lincoln City located approximately two hours from our hometown of Portland.  Lincoln City is one of our favorite cities to visit along the coast for multiple reasons.  1) We know someone who owns a couple of beach front condos and the price is right to rent them 2) It's touristy, but not too touristy-- meaning that there's good shopping but there's also many places to get away from all of the people 3) It's a very dog friendly city. 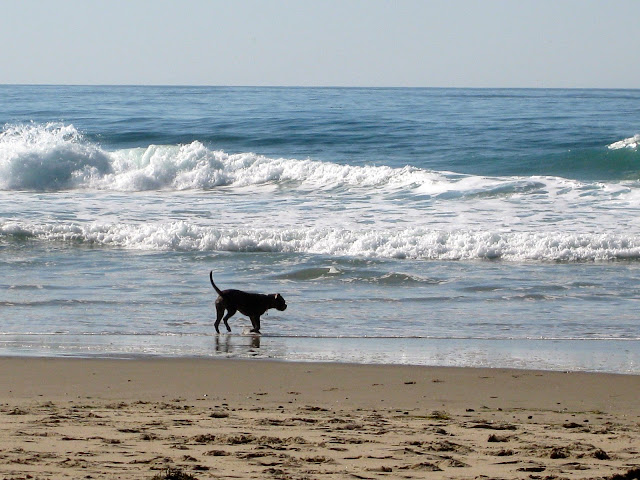 Earlier in the week Athena told you her thoughts on our beach vacation, now it's my turn to tell you EXACTLY how it went:

1.  Athena was terrified of the sand and the ocean on our first day

We brought Athena down to the beach for an evening walk on our first night.  The second she touched the sand she FREAKED out!  Luckily we had her on leash, because I don't think that we would have been able to control her if she were off leash.  From seeing her reaction to the sand, we could tell that this probably was her first touch of sand.  The sand experience was like many that have occurred in the past few months which leave me wondering just where Athena came from and how she spent the first year and a half of her life, because I don't think it was spent getting out and about and experiencing the world.

2.  Athena learned to love the sand and the water

On the second day of our trip we brought Athena down to the beach for a morning walk.  This time, we equipped ourselves with Athena's two favorite things: her ChuckIt! ball and the launcher.  Athena was once again a bit confused about all of the sand under her feet, but she quickly forgot about it's squishiness once B unclipped her leash and started flinging her ball through the air.  She LOVED chasing after her ball, especially if it happened to splash in the ocean.  Each day we visited the beach three times-- once in the morning, afternoon, and evening.  And after each trip to the beach, Athena would stand at the bottom of the stairs and protest our departure.  She didn't want to ever leave! 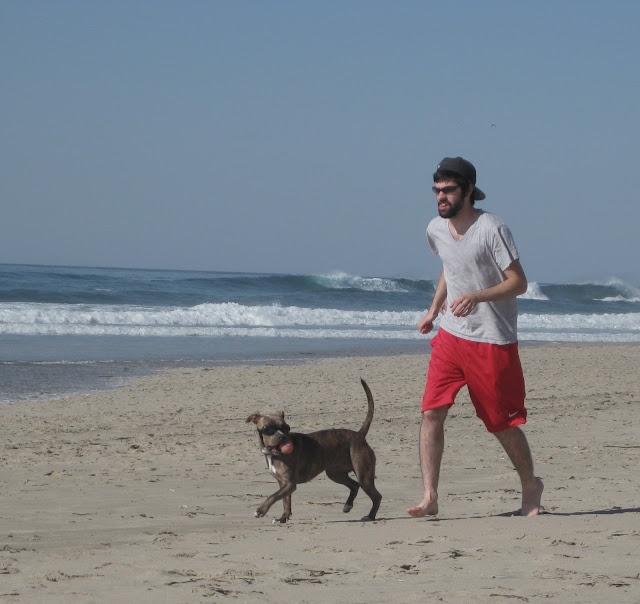 So, we totally broke the rules and let Athena off leash on a leash required beach.  I'll admit, it wouldn't be the first time that we've broken the rules, so we decided just to do it.  I mean, all of the other dog parents on the beach were doing it too =)

Throughout the four days at the beach, Athena showed us how well she can behave while off-leash.  We never had to worry about her running up to unknown people, chasing after the seagulls, or approaching other dogs-- unless we instructed her to do so.  The only time that she took advantage of being off leash was to chase a horse...whoops!  Luckily we were able to call her back quickly...I will add that another dog did it too, so she wasn't the only naughty one at the beach that day!

4.  Athena made some friends

The beach was filled with people and their furry companions.  Some people walked their dogs on leash and some let their dogs romp off leash.  As we are still assessing Athena's "dog aggressive" label that she received from her previous owners who returned her to the shelter, we are never the ones to approach people to ask if Athena can play with their dog.  We were surprised at how many people actually were the ones to approach us and mention that they noticed from afar how well trained Athena was and wondered if she could play with their dogs.

Athena got to play with SO many dogs on the beach and every encounter was excellent.  Aside from engaging in puppy play and ball chasing, she also had the opportunity to practice greeting a variety of dogs that walked by us.  We were so proud of Athena and happy that she received so much dog socialization on the trip.

Oh yes, we did!  Of course one of my goals while in Lincoln City was to stop in to the local pet shop called Paws On the Sand.  This cute pet boutique had the BEST stuff!  The owner told us that he goes to multiple pet shows each year to find the latest and greatest toys and pet gear to carry at his shop.  One of these latest and greatest items happened to be Doggles! 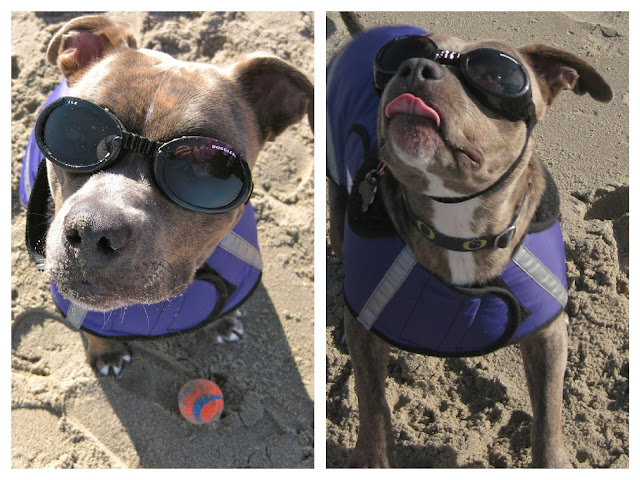 If you want your dog, especially your pit bull type dog, to be approached by humans of all kinds...you need to buy some Doggles.  I'm telling you, everyone and their brother came over to talk to us at the beach when Athena was wearing hers.  They wanted to know where we got them, how we liked them, and if we thought their dogs would like them too.  Paws On the Sand should probably send us a little somthin' somthin' for all of the referrals we made to their store =)

6.  Athena worked on her tan

When she wasn't fetching her ball, splashing in the ocean, playing with doggy friends, or having her picture taken, Athena was getting her tan on.  She enjoyed laying on her beach towel and watching the waves roll in while she frequently changed positions to ensure her entire body got an even tan.
7.  We considered moving to Lincoln City

Ok, maybe not really, but the thought did cross our minds!  Athena loved the beach so much and we loved watching her love it.  More trips to the coast will definitely be in our future...probably not again until next summer though, because I will assume that Athena wouldn't appreciate a soggy Oregon beach during the winter!

How do your pets like visiting the beach?  What's their favorite beach activity?
Posted by Pitlandia Pooch at 6:00 AM