Back in February, I announced that Athena and I were in training to run a marathon 2.5 mile race together.  The day finally arrived this Saturday when we joined over 6,000 others on Portland's Waterfront for the Oregon Human Society's Doggie Dash!

One of our New Year's resolutions for Athena was that we would like her to learn how to jog with us.  Up until we began training for the Doggie Dash, Athena was the worst running buddy ever.  Whenever I would pick up speed from a walk to a jog, she would go bonkers and start sprinting.  Sprinting is now a thing of the past and I am happy to announce that Athena is now a fantastic running partner for myself and her dad!  Athena's Freedom No-Pull harness has done wonders for her as well as our "more fun than dirt" training.


Day of the Dash:

As great of a runner as Athena has become, I was still very nervous leading up to the day of the Doggie Dash that Athena wouldn't be able to run with me.  From all of our experiences with the Portland Pit Bull Parade and Respectabulls walking groups, Athena has an extremely hard time keeping her cool walking with other dogs.  I was starting to have nightmares of what would happen when we joined 6,000 others and their dogs for a dog run.  It actually wasn't until the night before the race that I made up my mind and decided that Athena would join me for the run.  I figured if she pulled too hard, then I'd just have to quit and hope for better next year.


On the day of the run, the time approached 9:00am and I was already sweating as we lined up at the start.  I was so nervous as to what would happen as soon as the shotgun went off.  Actually, I was more afraid of what kind of mess we would be in if Athena started acting crazy during the line up with so many dogs around us.  But, I was an extremely prepared dog mama and packed a whole treat bag full of cheese, pepperoni, and kibble.  As we got in position to begin the race with hundreds of humans and their dogs, Athena had 100% attention on me and her treats.  Not once did she give a play bow to another dog (even though there were dogs only inches away from her), or even show interest in greeting those around her.

As soon as the race began and the sea of people and dogs started to run, I knew that I might be in trouble.  Athena started mega pulling and I had all that I could do to hold on tight and hope that she didn't pull the entire 2.5 miles (I may have died if she did).  Lucky for me, Athena only pulled for about the first half mile.  She finally tired herself out and trotted next to me for the remaining two miles, just like we had practiced!  I was SO proud of her.  She was what gave me the push I needed to run the entire time without stopping.

All kinds of fun:

The race ended back at Waterfront park and the announcer said "here come the tutu girls!" as we crossed the finish line.  Athena was totally exhausted and did a frog flop in the grass to cool off. 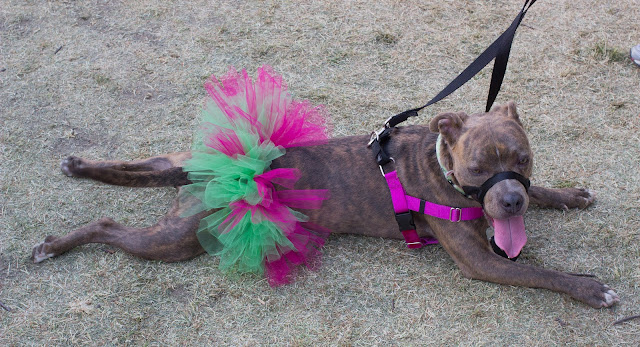 When we finally caught our breath, we paroozed the many vendors at the event and stocked up on some pretty great samples.  There was also a free pancake breakfast, mimosas, beer, and goodie bags for all participants. 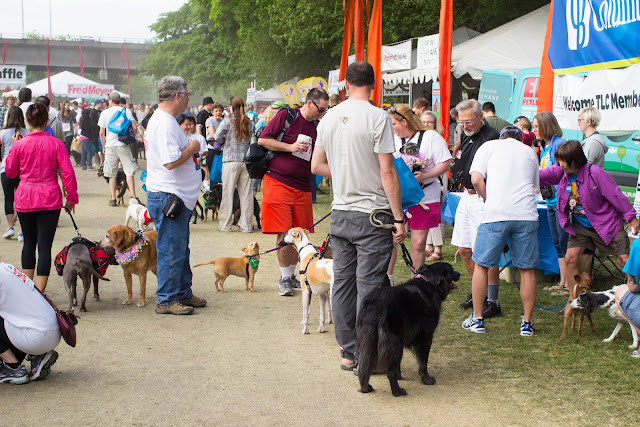 We also met some fellow tutu wearers who we stopped to take a picture with: 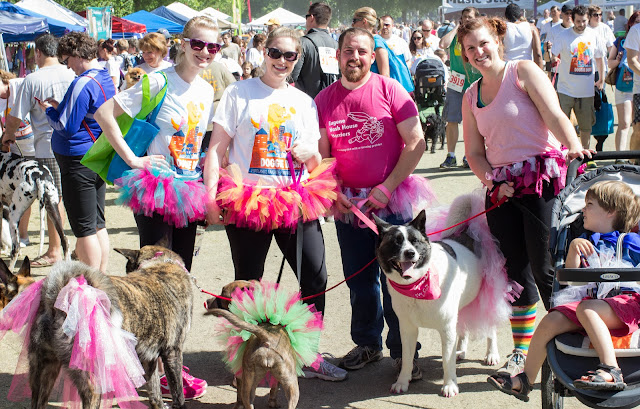 The city goes to the dogs:

Following the run, we ate lunch at the nearby Rock Bottom Brewery where they allowed Athena to join us in their outdoor seating area.  Every table outside was filled with doggie dashers!  All of the dogs were treated like royalty and received their very own water bowls and treats from the staff. 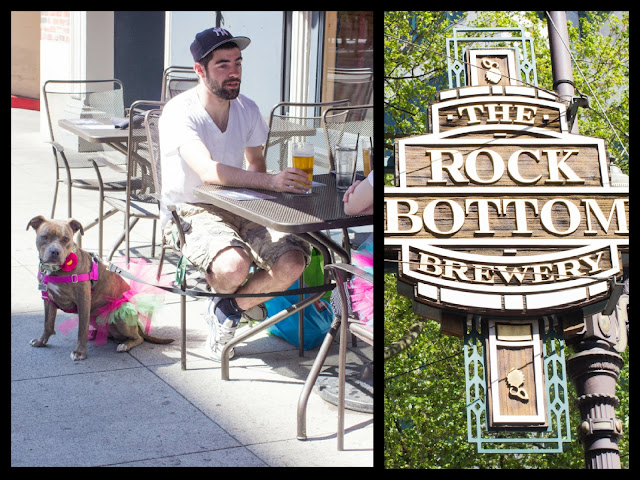 As if the day wasn't filled with enough excitement, Athena also rode on public transportation with us to and from the run.  For one day only, Trimet allowed dogs participating in the Doggie Dash to ride the max (the light rail system in Portland).  We live super close to a max line, so it was very convenient to not have to worry about driving and parking downtown.


Of course, Athena was pretty nervous getting onto the train, but she warmed up quickly with treats.

I keep bonking myself in the head that I almost didn't even bring Athena to the Doggie Dash with me.  I was just that certain that she wouldn't succeed.  I am so glad that I changed my mind and gave her the chance to succeed.  I seriously should have known that she would be a rockstar!  Not only did she exceed my expectations for the run, but she was also an amazing breed ambassador the entire day while riding the max and meeting new people and dogs at the dash.  SO many people approached us wanting to meet Athena and comment on how well behaved she was.  In all of our nine months together, the Doggie Dash has been the most rewarding day that we've spent together.  Athena really showed me how far she's come and just how lucky I am to be her dog mom!  I am also so excited to announce that the Oregon Humane Society raised nearly $400,000 at the Doggie Dash to support the animals in their care.